Irving, Texas-based Exxon Mobil Corp. (NYSE: XOM), which has a major presence in Houston, has decided to move forward with a $2 billion project in Baytown.

Exxon will expand its Baytown chemical plant, creating about 2,000 jobs during construction, according to a May 2 press release. The expansion is expected to start up in 2022.

Once online, the expansion is expected to create at least 25 permanent positions paying at least $62,970 per year, according to documents filed last summer with the Texas comptroller.

The expansion will add a new Vistamaxx performance polymer unit, which will produce “products that offer higher levels of elasticity, softness and flexibility,” per the May 2 release. It will have a capacity of 400,000 tons of Vistamaxx polymers per year, which will “contribute to a reduction in materials used and increased performance in everyday products,” per the release.

Exxon also will be able to enter the linear alpha olefins market, producing about 350,000 tons per year. “Linear alpha olefins are used in numerous applications, including high-performing engine and industrial oils, waxes and building blocks for surfactants, polyethylene plastic for packaging, and other specialty chemicals,” per the release.

According to Exxon’s release, the 100-year-old Baytown complex is the largest integrated petrochemical complex in the U.S. It spans about 3,400 acres along the Houston Ship Channel and includes a refinery, chemical plant, olefins plant, plastics plant and global technology center. Last year, Exxon completed a new 1.5 million-ton-per-year ethane cracker at its Baytown complex after four years of construction.

“Our Baytown chemical expansion will put us in a solid position to maximize the value of increased Permian Basin production and will deliver higher-demand, higher-value products produced at our Gulf Coast refining and chemical facilities,” Exxon Chairman and CEO Darren Woods said in the release. “Global demand for chemicals is expected to be greater than energy demand growth and GDP growth over the next 20 years.”

The newly announced expansion project is in addition to Exxon’s Growing the Gulf initiative, which the company announced in 2017. The $20 billion, 10-year initiative will build and expand 11 manufacturing facilities, according to previous press releases. Investments began in 2013 and are expected to continue at least through 2022.

The recently completed ethane cracker plus other projects in Mont Belvieu, Beaumont and other areas along the coast are all part of the Growing the Gulf initiative. In Beaumont, Exxon recently made a final investment decision to move forward with a major expansion of its refinery.

Another project associated with the initiative is Exxon’s joint venture with Saudi Basic Industries Corp., known as SABIC, for a proposed $10 billion, 1,400-acre petrochemical complex in San Patricio County, Texas. The plans include an ethane steam cracker that could produce 1.8 million tons of ethylene each year. 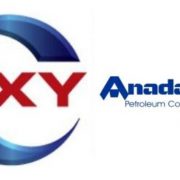 Anadarko cancels Chevron deal, enters into Oxy deal for $57B