Here are four big factors influencing the domestic oil and gas industry as the week begins:

The rig count continues to escalate steadily.  The DrillingInfo daily rig count sits at 1105 as of May 13, up 25 from two weeks before.  This is not surprising at all – crude oil prices remain strong, making an increasing population of potential drilling projects economic to drill.  More than 80% of those rigs are drilling oil wells, and over half of them are doing it within the state of Texas.   Again, no surprise, given that the preponderance of the vast Permian Basin lies within the state.

We should expect the rig count to continue to rise at least through the end of June , at which point company drilling budgets for the second half of the year will kick in.  We’ll have to wait to see what happens after that, although if the strong price environment prevails it is reasonable to expect continued steady increases through the end of 2018.

The oil price didn’t rocket up after President Trump’s Iran announcement.  In fact, the opening WTI price on Monday morning was about a dollar below its level when the announcement was made.  Obviously, the market had already priced the President’s decision into its collective hive mind.  No surprise there.

That having been said, the major factors that influence crude prices do appear to agitate in favor of further increases in the coming months.  Demand growth remains strong, declining inventories globally indicate that the 4-year global surplus has pretty much gone away.  A new OPEC reports indicates that “oil inventories in developed nations in March fell to 9 million barrels above the five-year average. That’s down from 340 million barrels above the average in January 2017.”

The same OPEC report also notes that the cartel possesses plenty of spare capacity to step in and stabilize the market should a dramatic drop in Iran’s oil supply ultimately come about:  “OPEC, as always, stands ready to support oil market stability, together with non-OPEC oil producing nations participating in the Declaration of Cooperation.”

OPEC’s export limitation agreement with Russia is set to continue through at least the end of 2018, and that, along with these other factors, agitates in favor of crude prices ending the year slightly higher than their present levels.

A widening Permian price differential could send capital to other U.S. basins during the second half of the year.  Deepening pipeline constraints are making it harder and harder for Permian producers to get their product out of the Basin to market, especially those who do not own reserved capacity on the increasingly strained pipeline system.  The Wall Street Journal reported on May 10 that some companies are experiencing as much as a $10/bbl differential as a result.

While drilling budgets for most producers are set through the end of June, this increasingly constrained situation could result in companies that produce in multiple basins shifting some of their drilling capital to non-Permian regions during the second half of the year and into 2019.  The Eagle Ford Shale, DJ Basin and Bakken Shale would be the most likely beneficiaries of such a re-directing of capital.  The per-well economics in these other basins may not measure up to those in the Permian, all other factors being equal, but the differential blowout for some Permian producers means all other factors aren’t equal at this point.  This situation is likely to persist into 2019, when a raft of new pipeline buildouts are scheduled to come online.

The growing U.S. refinery/production mis-match means America’s crude exports will keep rising.  The U.S. Energy Information Administration reports that exports of domestic crude topped 2 million barrels of oil per day (bopd) in April, a whopping rise of 489,000 bopd from March, and 210,00 bopd higher than the previous record set in October 2017.

U.S. refiners set up mainly to process mid-gravity or heavy crudes coming in from other countries simply lack the capacity to refine all of the light, sweet crude flooding out of the nation’s shale basins.  The fact that the oil has to be refined somewhere and that producers are often able to commander higher prices by exporting their product, along with ongoing expansion of export capacity at the Port of Corpus Christi and other Gulf Coast ports mean that we can expect to see the U.S. become an even bigger player in the crude export market in coming years.

All in all, 2018 is a very healthy and expansive time to be engaged in the oil and gas business in the United States. 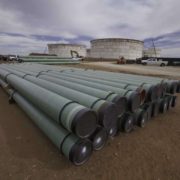